After completing his undergraduate medical studies, Mr Oshowo gained his Masters of Surgery at the Univerity of London in 2000, before being appointed as Honorary Senior Lecturer at University College London in 2002. On top of this, Mr Oshowo received further specialty training in colorectal diseases as a Travel Fellow at the Cleveland Clinic Foundation, USA in 2002.

Mr Oshowo is very experienced in many areas of colorectal surgery including haemorrhoids, gallstones, hernias and the treatment of chronic pelvic pain disorders. With an active interest in research and academia, Mr Oshowo has published many articles, appeared as a guest lecturer and presented internationally on numerous occasions. As a Fellow of both the Royal College of Surgeons, UK and a Fellow of the West African College of Surgeons, Mr Oshowo dedicates time to outreach training programmes training new doctors overseas.
Read more 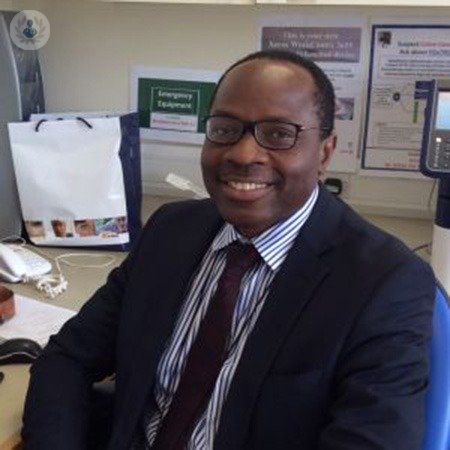 Index What is a colonoscopy? &a...

What is laparoscopy? Lapar...

Index: What are haemorrhoids? ...

What is a hernia? A hernia appears as a lump, most commonly in the abdominal or groin area. They occur when an organ, often the bowel, protrude...

What are gallstones? Gallstones are hard lumps or stones, usually made of cholesterol or sometimes...

Any cookies that may not be particularly necessary for the website to function and is used specifically to collect user personal data via analytics, ads, other embedded contents are termed as non-necessary cookies. It is mandatory to procure user consent prior to running these cookies on your website.